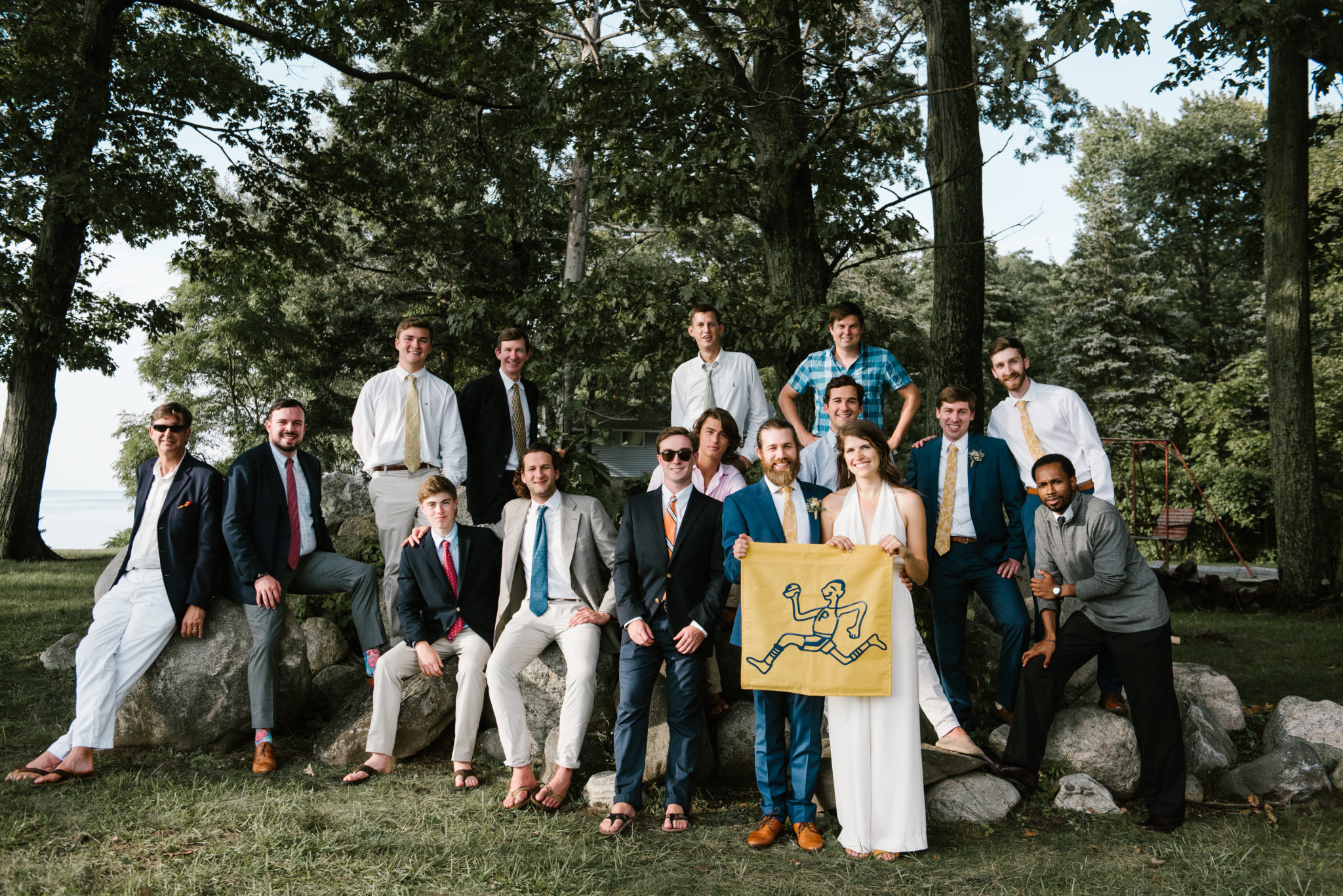 Welcome to the next installment of the Alumni Newsletter. This edition, Alumni News and Notes, offers updates from members of our Alumni Community. We invite you to write your own update in the comments section of the blog post via the Pemi website.

Mike Benham is engaged to Meghan Tadio. They will wed on August 17, 2018 in New Hampshire.

Nick Bowman will attend Wesleyan University in the fall.

Cory Fauver shares the following, “Dwight Dunston, a love advocate and Bean Soup editor, officiated my wedding to my longtime partner Arielle Rebek on September 1 in Fennville, Michigan! A multi-generational cadre of Pemi boys joined the celebration. Arielle and I are jumping into 2019 with ambitious travel plans for our honeymoon. We’re heading to Chile and Argentina, with a focus on hiking in Patagonia, for the better part of 3 months! Arielle just finished a stint teaching two darkroom photography courses at Carleton this fall as a visiting professor. I will be leaving my job of the last year (software engineer at an SF-based tech publication called The Information) to open up some time for travel. When we return, our plans are up in the air, but we’ll return to Oakland, CA where we’ve lived for the past three and a half years.

Pierce Haley will attend Colgate University in the fall.

Campbell Levy and his wife Courtney welcomed Wilder Fox Levy to the world on June 8th of 2018. Wilder is doing awesome, already starring in some digital advertising pieces. Look for him in a big up-coming Starbucks campaign.

Former Pemi camper and counselor Conor Shaw married Rachel Clark on August 11, 2018 at her childhood home in Lincoln, Vermont. Pemi veterans Jake Fauver and Josh Fischel were among the groomsfolk, and several others were in attendance, including Dwight Dunston, Chip Fauver, Cory Fauver, Ryan Fauver, Rob Grabill, and Jeff Miller. The evening ended as many other good ones have-with a stirring rendition of campfire song by a group of the nation’s best! (See picture below)

Rob Verger and Roselle Chen were married on the steps of Grant’s Tomb on October 6 in a small ceremony officiated by Rob Grabill.  Rob is currently the assistant tech editor at Popular Science, where he writes articles for popsci.com and the print magazine, and is a frequent guest on TV outlets such as Cheddar and Fox Business. Roselle is a news producer with Reuters, where she reports and produces video stories like a look at “Mother Pigeon,” an ice-dancing federal judge, and a father-and-son-owned “crazy” sock company. They live in Manhattan. (See TRIPS picture below)

In May 2018, Luke Whitman graduated from Columbia’s GSAPP (Graduate School of Architecture, Preservation, and Planning) and received his M.S. in Real Estate Development.  This fall, he started a new job as a Project Manager for Stellar Management as a member of their construction & development team.  He’s currently working on an adaptive re-use project that involves the renovation and merger of two existing 800K square foot buildings built in 1904, called One Soho Square.

Paul Fishback had dinner a couple weeks ago with Greg Epp in Buffalo, the two hadn’t seen each other in 35 years! Both were in Lower 2 and Lower 6 in the summers of ’75 and ’76, respectively. Great to hear about this re-connection!

After finishing a family hike in the Patagonia’s in Southern Chile, the Kanovsky family ran into Ben Nicholas in the super small Balmaeda Airport. Ben was in Coyahaique fishing!

Jim Staples caught up with fellow Alumni Bandy and John Carman by email in December and registered on the alumni site. Way to be, Jim! He writes, “I’ve lived in Philadelphia for 44 years, surrounded by Tecumseh folks, and still enjoy reminding them about Tecumseh Day, 1967. Good luck, long life, and joy to all. Jim Staples, Pemi ’65-’67, ’70-’71”

In August, Ander Wensberg, Esteban Garcia, Fred Seebeck, Roger McEniry, and Jaime Garcia reunited in Cooperstown, NY to tour the Baseball Hall of Fame. Afterwards, the group traveled north to Pemi to participate in the Rittner Run in August. Stay tuned for information about the 2019 trip!

Dickinson student, Zach Popkin, offered the following live commentary while announcing the Dickinson-Swarthmore soccer game: “Camp Pemigewassett’s Patterson Malcolm enters the game for Swarthmore, a ten year tie guy, and a shout-out to his father, Charlie Malcolm, if he is watching.”

The memorial service for long time Pemi camper and counselor, Chris Johnson (Pemi years 1986 – 1994), who died in the fall of 2017, will be at St. Michael’s Church in Brattleboro, VT on February 16 at 11 AM. For more information, email Kenny.

John Armitage published a book, Bringing Numbers to Life: LAVA and Design-led Innovation in Visual Analytics. He adds, “It portrays the results and design process of the LAVA visual analytic design project conducted at software providers Business Objects and SAP from 2004-2014. 500+ paperback, full-color pages with visual analytic design images, design process analyses, and historical background to this breakthrough design language intended to open up quantitative analysis to mass consumption.” You can read it online, or buy the hardcopy via Amazon. Or connect with John on LinkedIn.

Hilary Bride took a new job in December as an Intake/Admissions Specialist at the Commonwealth Center for Children and Adolescences in Virginia. This is the only public psychiatric hospital for youth in VA and deals with acute mental illness crisis.  She writes, “I was inspired with my work as a volunteer as a Court Appointed Special Advocate for Children (CASA) and will continue to live in the beautiful Shenandoah Valley in Staunton with Rufus in my new, rented, tiny home.”

John Carman spent the last 5 months adjusting to a new life as a retired person after 35 years of 60-hour workweeks with the Boy Scouts of America. “I am as busy as I have ever been but am thoroughly enjoying doing the things I want to do on a daily basis. Having a one year old granddaughter and a two year old grandson nearby helps occupy my time.”

John and his wife enjoyed a week in mid-coast Maine in the end of September, an area he learned to love during a Pemi post-week session in 1970 when Tom Reed Sr. And Jr. took him to Boothbay Harbor and Monhegan Island. Monhegan Island was one of his favorite experiences growing up, so he took his wife there for a day as part of the vacation. “I still remember that stormy day with rough seas standing on the top of the boat with TRJR and (I believe,) Dave Wallingford, braving the wind and rain in preference to the odorous cabin below with less seaworthy passengers.”

Keith Comtois lives in Rio Verde, Arizona just east of Scottsdale with his wife of 37 years, Ann, after spending fifty years in Cleveland, Oh and ten in the Chicago suburbs. He still works in commercial banking credit administration. “My years at Pemi were 1968 and 1969, I think. Definitely 1969 as I remember watching the moon landing there. I fondly think of those two summers in NH.”

Larry Davis retired from the University of New Haven on August 31, but will continue research on San Salvador Island. He moved to Concord, NH during the summer and recently received the New England Environmental Education Alliance Award for Non-Formal Education.

Dan Duffy writes, “Living quietly with an old Lab, a dozen chickens, an emu and two grandsons. Quieter since we found homes for the four extra roosters. A day doesn’t pass without thinking of Al Fauver, Rob Grabill, Fred Seebeck, Larry Davis, Sandy McCoy or any other fine men I knew up there when we all were much younger than I am now. Good wishes for the New Year.

On September 10, Henry Eisenhart started a new job at EnergySage, a company with a small team in Boston running an online solar shopping marketplace that pairs consumers with solar installers from a pre vetted network. His role as a Partner Success Manager is to manage installers from recruitment/selling the service to guidance and management.

Teddy Gales has been cast in his first feature film, Intoxicated Rain (Small Budget/ Million dollars) but once he pays his dues he is a SAG Member Screen Actors Guild, which will open more doors. He has one TV commercial and an Internet commercial for a new company, Outsystems.

Porter Hill started his new job as Head of the Lower School at Fairfield Country Day School. Many former Pemi campers have attended FCDS and we know that connection will remain strong into the future! Fun fact – Porter’s bugle hangs in his office.

Andrew McDermott is a full time shooting instructor with the Orvis Company and is set to marry his fiancé in May.

Walt Newcomb reports some wonderful travel with his wife Bendy. After spending New Years in Paris, they moved on to Kuala Lumpur, Malaysia, a place they lived in 2008-2019 while he consulted for Malaysia’s oil company, PETRONAS. He recommends nasi lamak as a local delicacy for those looking for a tasty tip. Next on the agenda is Langkawi before the final stop in Singapore.

Tom Reed’s debut novel, Seeking Hyde, was published on November 1 by Beaufort Books; very fittingly the New York publishing house owned by Pemi alumnus, Eric Kampmann. Tom’s historical fiction follows celebrated author Robert Louis Stevenson as he struggles for years to bring Dr. Jekyll and Mr. Hyde into being, only to see the story blamed for inspiring Jack the Ripper’s Whitechapel murders. You can learn more about the inspiration and the evolution of the novel in this Q&A interview with Tom by Deborah Kalb–although we notice Tom never told the interviewer that all he ever learned about writing he learned as an editor of Bean Soup. Seeking Hyde is available in hardcover, Kindle, and Nook formats from Amazon and Barnes & Noble (and perhaps your local bookstore!).

Austin Richards writes in, “My wife Victoria and I have 5 year old twin boys. I hope they can go to Pemi when they are 12. Currently they are in Kindergarten at a private school called Marymount. We live in Santa Barbara and I work at FLIR Systems as a senior research scientist. I have been there for 20 years. It is a dream job because I get to design, build, and use night vision cameras, radar systems, thermal imaging and other more esoteric technologies every day. My wife is an actress and filmmaker and she is working as a festival news producer for the Sundance Film Festival coming up in a few weeks.”

After fifteen or so years spending the winters in Okeechobee, Florida, Papa Jerry Slafsky and his wife have moved to Boca Raton. They still maintain a home in Freedom, NH for the summers. Papa has a small but well equipped shop there and spends his summers doing wood woodworking, fishing and putting on shows.